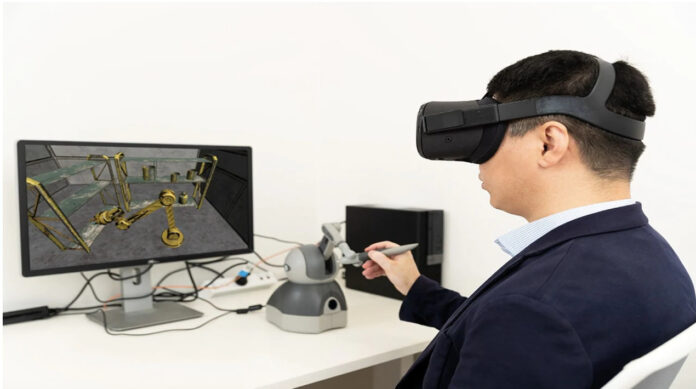 Engineer and Internet of Things expert, Dr Zhanwei Hou is developing an ultra-fast communication method to facilitate Tactile Internet, a technology which he hopes will one day allow users to experience touch over the internet.

For many, the ability to see and hear our family, friends and colleagues using digital devices like mobile phones and video calls has long been a reality – never more so than during the pandemic. But one day, we may also be able to reach out and touch someone miles away.

A researcher within the University of Sydney’s Centre for IoT and Telecommunications, Dr Zhanwei Hou, is making great strides in the field of Tactile Internet, developing a low-latency communication method – one which would reduce communication delays – which he hopes will one day allow users to experience touch over the internet.

The scientist and his collaborators are developing a low-latency communication technology which they hope will get the world closer to developing a method to allow geographically separated families to “touch” over the internet, the doctor, who is an electrical and information engineering expert, said.

How would it work?

For a person to touch something or someone remotely using the Tactile Internet, a user would wear a highly sensitive glove, stylus or other types of tactile device, which can render the sense of touch and transfer that sensation to the user. At the other end, an actuator device, such as a robotic avatar, would mimic the movement of the human operator and collect the touch feedback using tactile sensors.

The Tactile Internet could also have more promising applications, such as helping consumers feel a fabric when online shopping, conducting emergency repairs on factory automation, diagnosing a medical condition for a remote patient or even conducting repairs on space infrastructure from the earth.

It was noted that tactile communication and touch applications will be at the heart of 6G technology and “industry 5.0” – which are based on next-generation technologies aimed to improve interactions and collaboration between humankind and machines. To achieve this, the technology is using deep learning to increase reliability and reduce latency for optimised communications.

Transmitting sensations of touch from one location to another requires ultra-low latency and ultra-high reliability. Latency, in computing, electrical and information engineering, is the delay between a user’s action and the time it takes to be transmitted or reproduced.

The current internet mainly supports the transmission of visual and audio media. For Tactile Internet to work, there is a need to reduce latency and increase precision so that there is no perceptible lag.

While 5G technology provides ultra-reliable low-latency communication for radio access networks, for long-distance communication of Tactile Internet, the major bottleneck is the speed of light which is known as the “upper limit for speed”, meaning nothing can travel faster than light.”